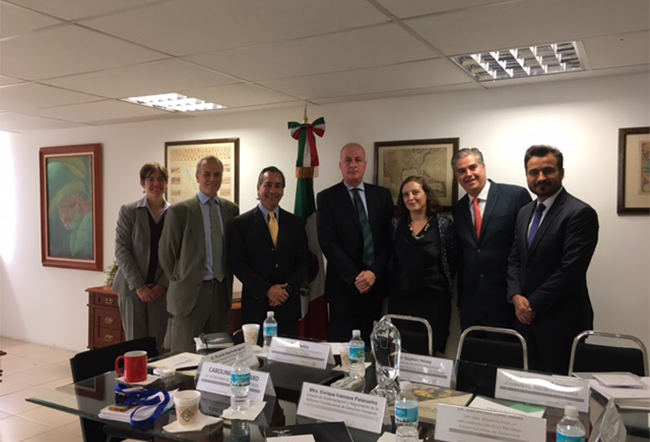 Some of our colleagues were in Mexico and this is blog details their experiences:

Tim and I arrived in Mexico City at around 0230 hours UK time following a 13 hour flight from Heathrow. It was already dark so we didn’t get much chance to see anything of the city in the short drive to our hotel. Tim – who has worked in Mexico City before – describes the driving as “like a shoal of fish” – they all seem to change direction at the same time with no signals and [mostly] avoid hitting each other.

After booking in to our hotel, which is only a short walk from the British Embassy, it was time to get some sleep.

Sunday is a rest day to recover from the flight, get our bearings and prepare for the busy week ahead. In the next few days we will be meeting and talking with a wide range of people and agencies that make up the Mexican criminal justice system. We will also be meeting groups from civil society to hear their experiences and aspirations. Our hope is that in a week packed with meetings we can form a good picture of the situation here in Mexico. We will focus on how the experiences and skills of UK policing [and the wider criminal justice system] can help in Mexico. Our strong focus will be on the rule of law; policing in a democracy; human rights as the basis of a guardian rather than warrior police model. We are looking forward to the week. 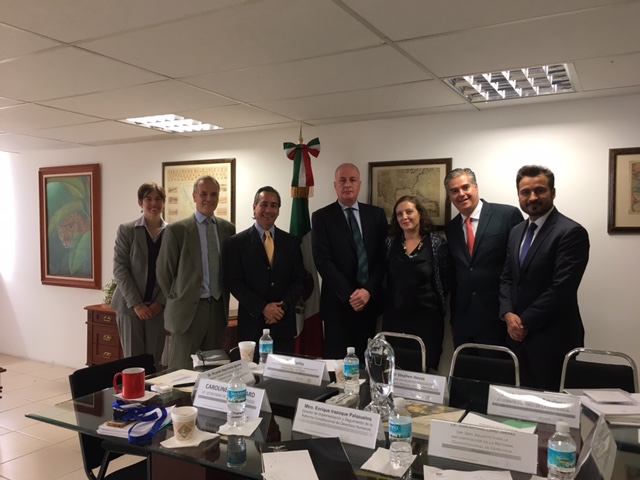 The start of the visit proper and Tim and I are excited to get started. We were met at the hotel by Ofelia Ortega, who was one of the principal organisers of our trip. A short walk to the embassy and we had our first meeting – a security briefing from embassy staff. We took the opportunity to ask them their views on the policing in Mexico City and got some pretty straight answers!

We were then into a quick series of meetings – including a visit to the US embassy [more difficult to get into than the UK embassy, with a fair sprinkling of armed police on duty] to talk to staff there about their efforts in Mexico. US aid to Mexican criminal justice is in the billions of dollars annually. We also met representatives from the International Committee of the Red Cross [ICRC] who work in Mexico with a focus on the strengthening of human rights in the criminal justice system. When you find out that Mexico is listed as the 9th most dangerous country in the world [Mexican Citizens’ Council for Public Security and Criminal Justice], you understand why the ICRC is here.

All in all our first round of meetings gave us a real taste for the challenges ahead and the opportunities that exist for working with Mexican agencies and the UK embassy to strengthen the rule of law.

The highlights of this busy day were a meeting with the Director General for Public Policy on Human Rights, Ricardo Sepulveda, in his offices at the Ministry of the Interior. This directorate was created by the new government as a visible demonstration of its’ determination to emphasise human rights in the criminal justice system. The conversation centred upon how the UK experiences could assist Mexico in issues such as police use of force, protocols for dealing with attacks on the LGBT community and coming to terms with the many thousands of “disappeared” people in Mexico.

The afternoon saw us meeting at the offices of Foundacion Idea, a prestigious think tank on social affairs. They are partners with the UK embassy in developing a model of community policing and I am pleased to say that during our visit we were able agree that Droman Ltd would provide a community policing expert to assist with the advancement of this project.

Our day started at the embassy with a chat with the military attaché Colonel David Strawbridge who gave us an interesting insight into the role and standing of the military in Mexican society. Later we met with representatives from Causa en Comun, which is a civil society organisation doing great work in supporting the victims of violence and their families and also works to hold policing to account. It was hard not to reflect that in the UK this is a role for central government but that is not the case currently in Mexico. 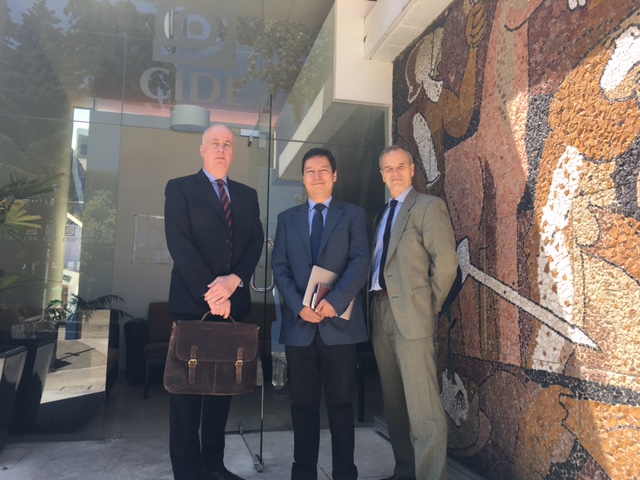 In the afternoon we visited Centro de Investigación y Docencia Económicas [CIDE]. This is a renowned centre of research and higher education specialising in social sciences. There we met with Professor Mark Aspinwall and Juan Salgado – both fonts of knowledge about the Mexican justice system. We were also able to tour the teaching facilities where higher level training for senior police officers from around Mexico was underway. Tim and I both felt that the atmosphere and feel of the classrooms was very similar to the police training environment in the UK.

The working day ended back at the embassy where Tim and I gave a short presentation on the current issues in UK policing and how they relate to the Mexican experience. 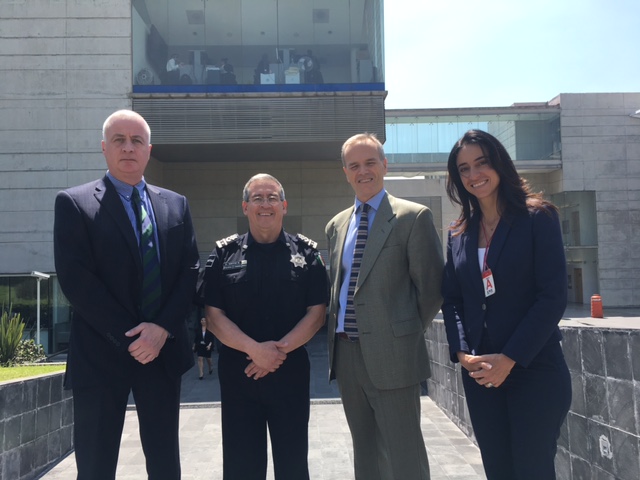 Today was one of our busiest days. We travelled through the Mexico City traffic [and I thought London traffic was bad] to the Headquarters of the Federal Police Scientific Division. There we met Comisario General Dr. Ortiz and his senior staff. We very much enjoyed a tour of the impressive facilities – forensic laboratories, cybercrime unit to name just two. We wrapped the session up with an in depth discussion of how the UK could best work with the Federal Police in a number of key areas. This was a very rich area and we agreed to have a further meeting on Friday to continue the discussion.

We also met with the Director General of the National Security Commission Jorge Sanchez and his staff. Much of this conversation centred on how Mexico deals with the tens of thousands of people who have “disappeared” over the last 5 years and how the UK might assist. We also discussed how Droman Ltd might offer help in a number of other areas where the UK has experience. On the way back to the embassy we completed our Mexico City experience when our driver had a gentle coming together with an eager taxi – all sorted amicably. It appears to be treated as inevitable given the nature of the traffic.

But the overwhelming memory for the day – apart from the cut-throat nature of the traffic – was the pride and professionalism of the members of the Federal Police whom we met.

Our last day in Mexico City was a busy one, starting with a meeting with Roberto Hernandez, an influential activist, lawyer and media figure who played a key role in bringing about recent legal reforms. We had a fascinating conversation about the possibility of importing the Police and Criminal Evidence Act to Mexico as the basis of a codified arrest, detention and interviewing model for the country. Several other meetings with senior figures in the Federal Police and the Attorney General’s office reinforced both the high reputation that UK policing has in Mexico and the potential business opportunities that exist.

A final meeting at the embassy with Agnes Annells and Ofelia Ortega allowed us to thank them for organising our week and enabling us to meet such a wide range of individuals and groups. With that done it was back into the rush hour traffic for a trip to the airport before our 10 hour flight back to the UK.